Who were these unfortunate people? What horrible crimes did they commit that warranted such a death sentence? Why should we care?

The French Revolution was a horrific time filled with madness, mutilations, massacres, murder, and mass executions between 1792-1796. According to the online encyclopedia Britannica, that time of hysteria saw 300,000 arrested, about 17,000 were recorded to have been executed, and roughly 10,000 died in prison or without trial . Not all of the condemned were executed by the guillotine. Drownings, hangings, shootings and other heinous acts of killing people also occurred. Mass executions and massacres were daily occurrences, conducted in Nantes , Paris, Lyon, and more, and in the departments of Mayenne et Loire, the Vendée, Loire-Inférieure ect to all across France to Meurthe and Bas-Rhin during the ‘French Revolution’ 1793-1794

From nobility to lower classes, military leaders to foot soldiers, lowest of clergy to priests and nuns, servants to actors, criminals and next door neighbors, women and children, it seems none were spared from accusations of seemingly senseless, and suspected crimes that led people to be arrested, executed or murdered . The destruction of Lyon, genocide at Nantes, and thousands murdered from over-populated prisons. Even those who started the Revolution such as Georges Danton were executed by the rising of those who were trying to usher in the Reign of Terror. Robespierre and his followers who were the force behind the Reign of Terror 1793-1794, were eventually executed. Politician and attorney Jean-Baptiste Carrier , who mercilessly carried out the drownings of 4 thousand men, women and children and other atrocities, was eventually charged and executed. This is history filled with hysteria, anarchial and carnage. We know about the notable people and their lives of the French Revolution, but what about the other garden variety of victims? Should they be set aside? What were their names? How can I find out about them?

The answer comes with the free searchable database of names and details of the executed from “DICTIONNAIRE DES INDIVIDUS ENVOYÉS A LA MORT JUDICIAIREMENT” (the whole title is longer than this) recorded and penned by French historian and journalist Louis-Marie Prudhomme provides this information. The two volumes online books contain the names, places of birth, residence and trial, age, some biographical info, and charges the accused were said to have been committed. A lot of exciting events; description of the crimes, conspiracies, assassination attempts, as well to breakers of the law, counter-revolutionists, trivial crimes, such as hiding a priest or made up charges of passing ‘fake information”. Unfortunately, these dictionaries are all in French. You will need an online translator and encyclopedia. You can highlight and paste the form information into an online translator to give you understanding of what happened. You will also need to use an online encyclopedia to understand some of the phrasing and background history of the events, crimes they are accused of ex: ‘malheureuses journées’ Need to know what the French Occupations were? FamilySearch provides this tool

This is what you may find

What you need to know

Youngest Recorded Person to be Executed (so far)

Oldest Recorded Person to be Executed (so far) 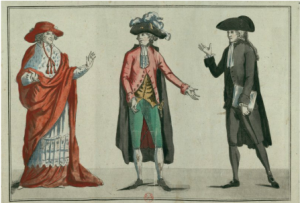 Dictionaries of the French Revolutionary Condemned

The Names of the Executed- Volume 1 & 2-by Louis Marie Prudhomme:

Browse the Rathelot Collection of those who were brought before the French Revolutionary Tribunal in Paris and executed between March 1793 – September 1794.
Names: Ab- Goy
Names: Gra - Zol

France Through The Ages

Copyright © 2022 – The Condemned of the French Revolution